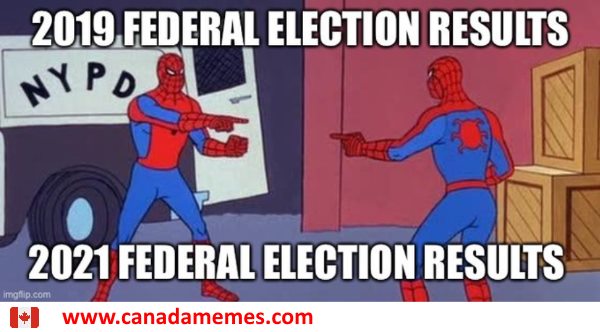 What a waste of time and money, six hundred million dollars worth, to end up with the same results, a minority government. Gunning for a majority of the votes, Trudeau called an early election, in the fourth wave of a pandemic and the middle of the crisis in Afghanistan to boot. Although people were ticked off at him for his poor (selfish) timing, obviously they were not ticked off enough or not enough voters were ticked off.

“could this election not have been an email?”

I’m not sure who benefits with this repeat of a Liberal minority government. Justin Trudeau can pretend he won and is happy with the results, but just a short while ago he complained that he cannot successfully run the country with a minority government. That was his excuse for calling the election, the wish for a majority.

So what, he can successfully run the country now? His drama classes are serving him well, he has the ability to spin the results any way he wishes to.

I guess the one positive thing (if there is one) is that Trudeau and the Liberals did not win a majority government.

That is easier to visualize. Those just starting out in the workforce stand to lose big time. They will never be able to afford a home and the luxuries we older folk were able to save for. The taxes to pay down the country’s debt and the rapidly escalating rate of inflation will mean saving will be next to impossible. Living paycheck to paycheck will become more commonplace.

As a rich kid, born with a golden spoon in his mouth, Trudeau spends money like there’s no tomorrow. Budgets are foreign to him, and balance themselves in his world. A billion dollars here and there means absolutely nothing to him. That’s because it’s not his own money he is spending. As my husband used to preach to our sons when they were younger, “the government doesn’t have any money, they spend our (hard earned/saved) money!”

Although I am disappointed in the (lack of new) results, as a retiree I am at the stage in life where I have earned a pension, savings and a home. It’s not my generation that will lose (not as much anyway) from the massive debt already incurred (and sure to grow) by the Liberal government, but the next one and the one after that. My children and grandchildren, and yours too.

Also disappointed and disillusioned (I’m sure) are those younger than I, perhaps with young children of their own, who had decided they want a change from the financial mess our country is in. Unfortunately, voting for one of the parties that did/do not have the numbers to win an election only splits the vote away from the Conservatives, the only party that could (mathematically) have beat Trudeau and his Liberals. That concept (always) seems to be misunderstood and is a bitter pill to swallow when your wish for change backfires.

We are now stuck with (at least) eighteen more months of rising federal (and personal) debt, increasing taxes and so on. The exorbitant price of gas and the steady increase in the cost of groceries will only get worse.

Are you happy and satisfied with the results? Or frustrated, angry, or indifferent?